J. R. R. Tolkien Autograph Letter Signed to his Proofreader re Lord of the Rings 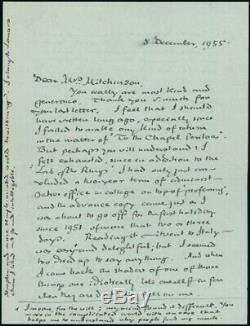 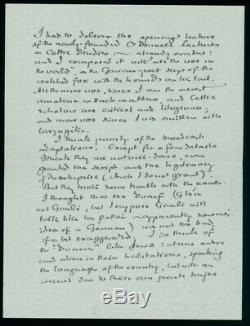 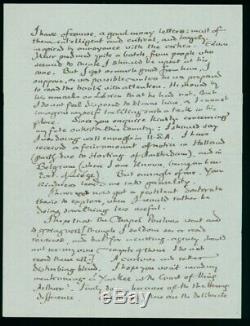 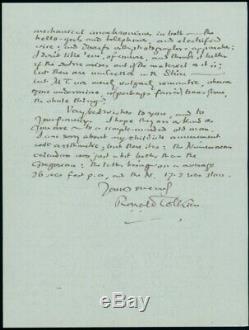 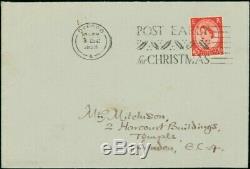 Tolkien Writes his Proofreader with a Lengthy Discussion of the. Including Criticism of Radio Broadcasts of his Work.

In a letter peppered with references to Middle Earth and its inhabitants, an exhausted Tolkien takes his first lengthy holiday in four yearsin Italy. Tolkien discusses the demands on his time, ranging from his teaching load, thesis advising, and publishing, to reading critical reviews. Tolkiens dissatisfaction with radio adaptations of.

I think poorly of the broadcast adaptations. Except for a few details I think they are not well done... I thought that the dwarf Gloin not Gimli, but I suppose Gimli will talk like his father... Was not too bad if a bit exaggerated. I do think of the Dwarves like Jews: at once native and alien in their habitations, speaking the language of the country, but with an accent due to their own private tongue.

5 5/16 x 7 1/8 in. The first page is embossed 76 Sandfield Road/ Headington/ Oxford. With original autograph addressed envelope. You really are most kind and generous. Thank you so much for your last letter.

I feel that I should have written long ago, especially since I failed to make any kind of return in the matter of To the Chapel Perilous. But perhaps you will understand I felt exhausted, since in addition to the Lord of the Rings I had only just concluded a two-year term of administrative office in college on top of professing , and the advance copy came just as I was about to go off for the first holiday since 1951 of more than two or three days. Reading it I went to Italy was easy and delightful; but I seemed too dried up to say anything. And when I came back the shadow of one of those things one idiotically lets oneself in for when they are distant fell on me.

[Written at bottom and continuing up left margin]. I mean for the will; my mind found it difficult. You move in the complicated world with an ease that helps me to understand why people find my much simpler and more simple-minded world bewildering. I cling to Lienaro whom I liked and found intelligible. I had to deliver the opening lecture of the newly-founded ODonnell Lectures in Celtic Studiesalready overdue: and I composed it with all the woe in the world,, as the Gawain-poet says of the wretched fox with the hounds on his tail.

I think poorly of the broadcast. Except for a few details I think they are not well done, even granted the script and the legitimacy of the enterprise (which I do not grant). But they took some trouble with the names.

I thought that the dwarf (Gloin not Gimli, but I suppose Gimli will talk like his father apparently someones idea of a German) was not too bad if a bit exaggerated. I have, of course, a good many letters: most of them intelligent and critical, and largely inspired by annoyance with the critics.

Edwin Muir produced quite a batch, from people who seemed to think I should be upset at his tone. But I got as much good from him, I suppose, as was possible unless he was prepared to read the book with attention. He showed by his remarks on Lórien that had not.

But I do not feel disposed to blame him, as I cannot imagine myself tackling such a task in his place. Since you enquire kindly concerning my fate outside this country: I should say I was doing well enough in the U. Your kindness leads me into garrulity.

I have now got a pestilent doctorate thesis to explore, when I would rather be doing something less useful. I hope that the Chapel Perilous went and is going well [though I seldom see or read reviews, and but for a cutting agency should not see my own In spite of them I do not read them all] A curious and rather disturbing blend. I hope you wont mind my mentioning a Yankee at the Court of King Arthur.

I only do so, because of the shattering difference. Of course there are the deliberate. The hellogirls and telephones, and electrified wire; and dwarfs with photographic apparatus: I dont like em, of course, and think it better if the satire arises out of the material as it is; but there are umbrellas in the Shirebut M.

Was merely vulgarly romantic, whereas you undermine, or (perhaps fairer) transform the whole thing. Very best wishes to you, and to your family, I hope they are as kind as you are to a simple-minded old man. When Paul Richards catalogued the letter in January 1989, he called this one of the finest, and longest, to appear on the market. She was appointed CBE (Commander of the Order of the British Empire) in 1981. She wrote many books, including The Chapel Perilous , published in 1955.

She was a proofreader of the Lord of the Rings. Historic Documents and Legacy Collections. For over 20 years, Seth Kaller has been one of the countrys largest buyers of important historic documents and artifacts. More than 10,000 rare manuscripts, documents, maps, and books handled by Kaller are now in institutional and private collections including working drafts of the United States Constitution, Lincoln-signed copies of the 13th Amendment and Emancipation Proclamation, and rare prints and broadsides of the Declaration of Independence.

Kaller is a member of the Antiquarian Booksellers Association of America (ABAA), the Professional Autograph Dealers Association (PADA), the American Antiquarian Society, the Manuscript Society, the New-York Historical Societys Chairmans Council, and the Papers of Abraham Lincoln Advisory Board. Everything we sell comes with our absolute guarantee that it is original and authentic.

Whether youre interested in the Founding Fathers, Documents of Freedom, Battles and Leaders, the Civil War, African-Americana, World History, Science, or a particular hero or villain, we can help you explore opportunities to take ownership of history. We can coordinate every aspect of the process for you, from searching for individual items to building entire world-class collections for your home, business, foundation, or favorite museum. Build a legacy by preserving history for generations to come. Through donations and loans to your favorite museum, library, or university, you ensure the survival of these important documents and act as a steward for personalities and ideas that shaped the world. Tolkien Autograph Letter Signed to his Proofreader re Lord of the Rings" is in sale since Thursday, April 2, 2020.

This item is in the category "Books\Antiquarian & Collectible". The seller is "sethkaller" and is located in White Plains, New York. This item can be shipped to United States.