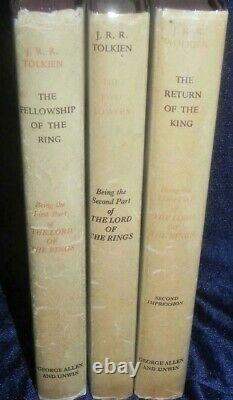 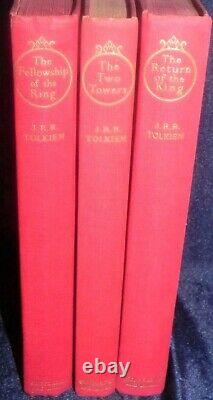 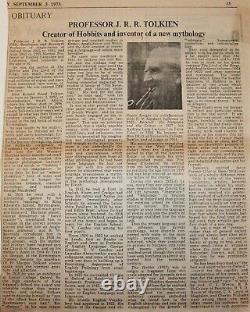 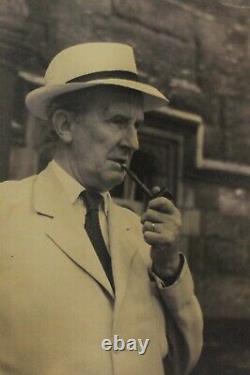 5, 2, 2 A an early first edition set. Fellowship has tattering on the dust jackets spine corners, the other two are less worn, as usual, Spines are discolored. There is no serious wear or damage to any of the books, bindings tight. FotR 5th has a 6th jacket, TT has a 3rd jacket, Quite normal at the time for the publisher to mismatch jackets to use them up from stock.

There are printing records from the time, but A&U publishing and distribution records were not kept. What printings were available at a given bookstore could have also been changed by the bookstore. 1957 set printings could also comprise a 5th, 6th or 7th Fellowship. See our fine 1,1,1 printing set.

As Tolkien book collecting grows in popularity, the availability of collectible/investment original condition books and jackets disappears. It is not just the printing/edition that matters to the value, but that serious collectors want only the best condition.

Books with damaged jackets or even no jackets at all, are now increasing in price, driving up the price of complete and better condition copies. That's how important condition is to value. Unlike other genre's, the market for Tolkien early editions is quite mature and well established. It is not a matter of waiting for a better copy to come along.

There aren't going to be any! There are no more hiding in the attic or charity shops. People sell off their more worn copies when they upgrade and now leave their collections to their children.

We've been a specialist dealer for 20 years. Some examples that were plentiful just two years ago are now completely gone or only the dregs appear.

First editions The Lord of the Rings and Hobbits remain the most in demand. About Impressions and hardback dust jacket Wear.

Impressions is the same as printings from the old technology of printing presses making an impression on the paper Everything is now digital and modern first printing books have a 1 in the number line to indicate first edition. Text changes can be made mid-printing by computer if they want, unlike older books which required re-setting the press. This 1 is removed on the next print run, so 2 is then the lowest number.

If there have been new printings, they will add the number 11 etc, so 10 numbers will still appear on the number line. With older books you have the edition by year and printing. You refer first the edition then impression number, so 1. American editions used the number line system earlier UK. An important note about ISBN numbers.

They are useless to book collectors! The number applies to the original registration of that particular publication, not necessarily the first edition of that book, but they can use the same number for variations like deluxe editions or changes to covers art or artist of the same text of that edition. For example, there are many variations of books of the 1966 Hobbit which many use the same ISBN. Publishers also created slipcase sets, as they did with the first LotR sets, where different impressions and ISBN can be mixed together in a new box and not comprising the first printings. The original three Lord of the Rings books were printed separately, as stocks ran out, they printed more.

Both books and dust jacket can be mismatched impressions, though the common re-used jackets are known. Paper and printing were expensive, they were not going to waste paper dust jackets back then. There are some lasting records from the printers from the mid-1950's, but not distribution records from the publisher Allen & Unwin. Bookstores could have made their own changes, matching old inventory to new.

After all, how often do you check the printing of a brand new book bought today? A "set" of LotR was whatever you found of the three titles together in a given bookstore, not necessarily matching the year or printing. Again, they were expensive fans likely only bought a book at a time as they could afford it, making their set years and impressions even more varied.

Some years had two printings. There are probable configurations of impressions in sets of the three titles based on year print runs. We know this as dealers we have seen hundreds of sets and recognise familiar groupings, even though any is possible. By the way, they would not have been grouped a later printing of RotK with earlier impressions of the other two, the highest impression in a set is always FotR. Where you see this, the set has been compiled.

Only by intention and searching would to have found a 111 set unless you worked for the publisher. There were also limited slipcases with impression books at that time. There are American, other countries and international editions also, but these are not as collectible as the British edition even though America was a bigger audience for Tolkien books. British editions were release first so considered the true first editions. Today, collectors want the earliest impressions of each title, which would have been likely available as a set and for jackets to match the book impressions as well as match in aging and wear.

We have noticed serious collectors will pay much more for a uniform aged set. Mismatched colour in the dust jackets simply does not look good on the bookshelf!

We coined the term: Uniform Wear which means all three jackets and books have similar colour, aging signs and paper wear so they present well as a set on your shelf. This does not mean they were bought together, but likely kept togther long enough for the aging to be uniformed between the three books. FotR was read more often as the first book, so its common the have the other two titles in much better condition and in paper percentage, but usually the colour is still uniform with all three books with age. Because hardbacks were very expensive, the publishers used cheaper paper.

Most of the dust jacket wear is on the spine which was exposed to the air. Back then, fewer people had central heating in Britain.

The common dampness in British homes led to mould, which in turned discoloured the dust jacket paper, especially the spine. This can range from complete deep brown to white spotting, to fading of the title colours.

The damp also caused bleed from the red cloth book covers to the back of the dust jackets. It also weakened the paper making the jacket spines subject to tattering and paper loss.

The jacket covers are often found very nice; however, the original colour is grey, not beige, or white. You can tell this by the grey flaps where the price and reviews are.

Discoloration is inevitable on sets today as evident by the photos posted in my listings, so the damage to the dustjackets paper by tattering or paper loss is everything to one set being more valuable than the next. No two dust jackets match in colour unless they have stayed together a long time. We have always had photos of the dust jackets laid flat so you can see the true condition, we have nothing to hide.

Completeness of the jackets is very important to value. You can think of this in terms of percentage of paper loss 5% or 10% which is usually on the spine ends from being pulled from bookshelf. Whole sections of paper missing unfortunately reduce the value significantly. As sets are so expensive, some people have had the paper loss repaired on early sets especially spine ends or top edges and corners.

Replacing whole sections like flats or large tear outs is restoration and not as valuable as the original jacket whole. These add no value to a book set whatsoever compared to a book missing its jackets completely.

Do not be fooled by some sellers trying to overprice a less expensive jacket-less book with a fake jacket. This item is in the category "Books, Comics & Magazines\Antiquarian & Collectable". The seller is "dogfark" and is located in this country: GB. This item can be shipped worldwide.