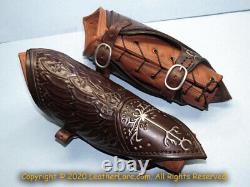 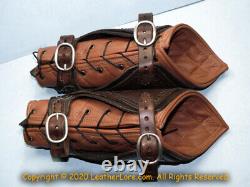 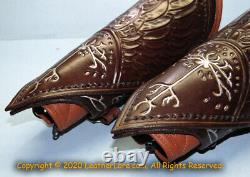 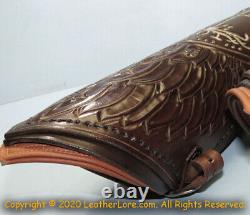 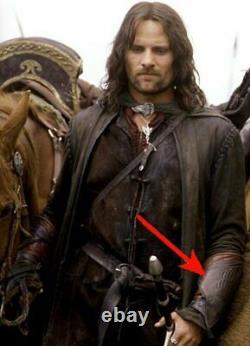 Handmade by me in my shop. These are 95% true replicas of Boromir's Bracers that Aragorn wears after his death.

Fully researched from actual museum displays and meticulously hand tooled from my own patterns, hand stitched dual layering (everybody else machine stitches these), all artwork painstakingly reproduced fully by my own hand. Includes my own hand made quilted leather padding!

And still these are less expensive and better quality than others that you will find here! My studies have shown that the truest colors are a Dark Brown top layer over a Chocolate Brown layer (chocolate brown is darker than dark brown), with medium brown padding, as shown in the photos.

I do make them in other colors though, and you can read my essay on my color research below.. These are constructed of three layers including the padding. There is the top layer with the feather and tree art and the bottom layer upon which the top layer, buckles and straps are all hand stitched together. The pads are separate pieces which I hand make using available pre-colored softer leather and a sewing machine. I can be difficult to assess the colors in the film as many considerations come into play. These are also complicated by the fact that there were two different actors that would wear these throughout the epic story. Boromir was the first to wear this until his death near the end of FotR, after which Aragorn put them on and wore them through the remainder of FotR, throughout the Two Towers and into RotK. Each actor had 12 pairs that were made, as well as each stunt double (usually two doubles for some of the primary actors). Quick math shows that at least 72 pairs were made many of which ended up appearing on screen. I have experience in the photo and film industry and there is nothing more important in both than lighting. Ive often been asked about why they look brown in the meeting of the fellowship scene in Rivendell and they look black on Aragorn. The quick answers are that the fellowship scenes are very warmly lit, which means more reddish-yellowish. You can see this effect in the skins tones and other clues. Brown tones will look more richly brown in such lighting conditions. Also important to note is that the condition of Boromirs gear is still rather new. Later adventures will wear on his gear. The death of Boromir and river battle scenes were more coolly lit with natural blues of sunlight, and such battle and death scenes are often filtered to have a duller lighting effect to enhance the dread or seriousness of the story. The bracers are also more used at this point and have been wet at times from the moisture of weather, the elements and possibly even some blood staining. When brown leather gets wet it very much gets darker. Dont forget how many were made, and its very probable that they were made in different colors for different scenes and characters.

I do believe that Aragorns version were probably made darker to better coincide with the overall coloring of his attire. Having said all of that above Ive charged myself with making a color scheme that should work for most all conditions. Ive studied film grabs and most notably I did the museum exhibit sleepover when it came near to me. There, I and a few others were allowed unlimited access to the displays at leisure during the overnight experience. Though no cameras or even notepads were allowed, they did give each of us a trivia sheet of questions and a pencil.

I saw so many things! I didnt do the trivia on the paper, I took notes! Now, the Bracers of Gondor specifically were not there to my disappointment, but much leather gear including Gondorian bracers of various sorts were there and I was able to really study them, their construction and their art. I was also later able to find someone elses photos from another museum visit where the Gondors were present, and upon which I could apply my notes! Ive determined that the true color is in between my dark and chocolate browns, leaning closer to the dark brown.

And both layers appear to be the same. So Ive decided this scheme for my basic. Top Layer with art: Dark Brown. Bottom Layer with straps: Chocolate brown.

Padding: I select pre-colored leather that is as close as I can get, and it can slightly differ from time to time. Tannery runs are never exactly the same. A NOTE ON LEATHER STAINS. Its important to note that the same dye will react slightly differently to each new hide. I cut the pieces from the same hide to maintain consistency, but a dark brown pair from one hide can slightly differ from a pair made from another hide. The item "Lord of the Rings Boromir Aragorn Leather Bracers Vambraces Costume Gondor Armor" is in sale since Monday, September 28, 2020. This item is in the category "Collectibles\Fantasy, Mythical & Magic\Lord of the Rings\Other LOTR Collectibles". The seller is "clorimer1" and is located in Coopersville, Michigan. This item can be shipped worldwide.