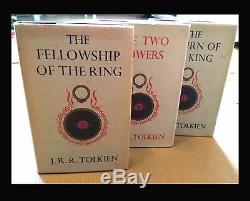 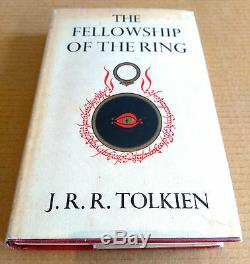 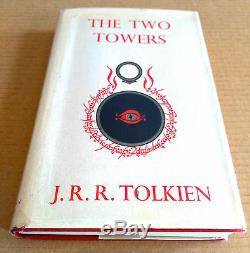 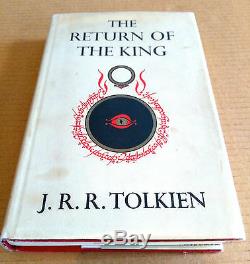 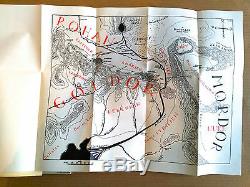 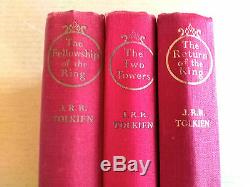 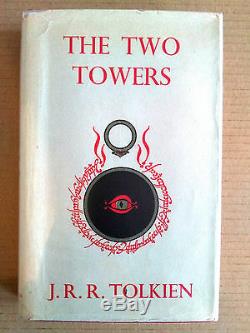 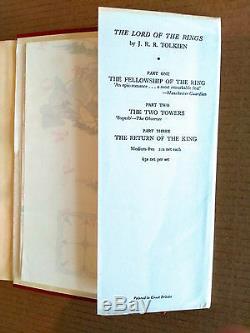 The fore edge of this copy has a slight staining but is not large and has minimal afftect on some leaves. Other than this as you can see it is a fine first edition 4th impression copy plus it has an even earlier 3rd impression cover which is much rarer. The Return of the King. First Edition 2nd Impression 1955. Condition Report: No inscriptions, no price clipping, hardback book and spine in very good condition, jacket in very good condition with plastic protector cover, map in close to mint unopened condition.

This edition is probably in the best condition of the three books since it has absolutely no inscriptions or clipping and all over in very beautiful standing. There is a slight 1-2 cm rip where the white paper of the map is attached to the book but it is nowhere near the map and not a big issue. Some sunning to the jacket but still very clear.

Three volumes, each bound in red cloth covered boards with illustrated Dust Jackets. Each dust jacket has a protector cover which can remain or be removed. This protector cover has enabled these volumes to remain in the condition they are in.

This is an extremely fine First Edition set. Books are complete with original dust jackets which are all in very good condition.

While they clearly show signs of age, a little bit of discolouration, slight marks on back of The Return of the King, they are still in lovely condition. Each of the jackets has a plastic protector which has further protected the dust jackets and the actual books from any other damage. The books themselves are in fine condition.

The book covers and spines as you can see are in very good condition and are still very bright and with limited ageing. The binding of all three books is perfect and their are no loose leaves. About The Lord of the Rings. The Lord of the Rings trilogy is one of the most influential literary works of the century.

Its first reception was mixed: favourable and perceptive reviews from C. Auden, who had attended Tolkiens Oxford lectures, were countered by others who were hostile, sometimes bitterly so. But the trilogy went on to astonishing sales and forged a major change in public literary taste. Heroic fantasy has since become one of the most commercially successful literary genres, having a transforming impact upon the entertainment industry, from electronic games to cinema.

Collecting and Investing in Tolkien. (See photo above about book investment prices). One of the reasons that people collect first editions is because the author often has a hand in the design of the book, and Tolkien is an excellent example.

Though Allen & Unwin had not planned on illustrating the book due to the expense, the professor submitted a number of his own drawings for consideration. The publishers were so charmed by them that, as Susan Dagnall wrote to the author, we could not but insert them, although economically it was quite wrong to do so. And when you sent us the second batch we felt just the same! This led to the request that Tolkien design the dust wrapper himself, resulting in the unique and striking jacket depicted below.

They also solicited Tolkiens advice on the cloth binding, accepting his design of a dragon at the bottom edge and mountains at the top. Both the jacket and the binding are now iconic. The Lord of the Rings, first editions in dust jackets. This novel took much longer to write, with Tolkien composing on and off between 1939 and 1952, and its final length was an astonishing 1,192 pages. Allen & Unwin were wary.

Rayner Unwin, the little boy who had enthusiastically endorsed The Hobbit, was now a young man working with the family firm, and he wrote to his father that the book was a work of genius Hammond & Anderson p. But the cost of printing was immense, and commercial success, despite the popularity of its predecessor, was uncertain. To minimize their financial risk they convinced Tolkien to publish the novel in three installments, with the understanding that if the first failed they would not publish the remaining books. They also came to an arrangement, unusual for that time, in which the author would not receive profits until after the books had paid for themselves. These novels would not be illustrated, but Tolkien did design the dust jackets and his son Christopher drew the maps.

The examples above are an exceptionally fine set; it is rare to come across volumes from the trilogy without some tanning of the jackets so these three books are a great set. The three books in The Lord of the Rings trilogy were published in the following order.

A second edition, extensively corrected and with Tolkiens new preface explaining the origin of the novel, was published in 1966, and the first one-volume edition (based on the text of the second edition) was published in 1968. This one-volume edition was the first time that the book appeared as the author had originally intended it. Both of these later editions are also considered collectible, and are less difficult to obtain than first editions. The best way to identify first editions of The Lord of the Rings is by checking the publication information at the front of each volume. The publisher should be named on the title page as George Allen & Unwin Ltd.

Check the dates on the back of the title page the first two books should be dated 1954, and the third dated 1955, with no later dates present. One of the most common questions about copies of these books is How can it be a first edition if the dust jacket lists the later books in the series? For most books (for instance James Bond novels and the Harry Potter series) it is important to make sure that the dust jacket or list of works by the same author does not name books published later, which would indicate that your copy is not a first edition.

The Lord of the Rings is a significant exception to this rule. Because the series was originally written as one long book, and only split into three for financial reasons, the publishers could anticipate the books to come and used the dust jacket flaps to advertise them. Collecting and Investing in Rare Books. The value of rare first editions books has risen 398pc in a decade or 8.8pc a year, according to a new index. Over the last decade FirstEdition Lord of the Rings books have risen in value by 567%, a massive return on your investment.

These books are one of the best investment set of books of all time and are rising in value all of the time. The value of rare first editions books have risen 398pc in a decade or 8.8pc a year, according to a new index and rare first edition continue to keep rising. As you can see there was not many true first editions of Lord of the Rings and if they do come up condition is always a feature. While I have made great effort to photograph the books as best I could please excuse the quality at times of my photograph. Some photos may see a shadow of myself over the books. Just be aware that these shadows are not there on the book. I hope they are sufficient to illustrate these fine first editions of Lord of the Rings.

Dont miss out on owning a unique piece of literary history. A must have and a fantastic investment!

First Edition, Impressions 5th, 4th, 2nd. We have the highest possible standards for our autographs and collectibles.

We want you to truly enjoy owning a piece of history. Every signed item we sell is genuinely hand-signed; our signatures are not prints. We have many years of experience in the autograph and rare items industry, specialising in Beatles, Rolling Stones, Laurel and Hardy autographs and historical rarities and collectibles especially first edition books.

Our product knowledge is extensive. It comes from A SMOKE FREE and ANIMAL FREE HOME and has been delicately stored in correct conditions. We take the packing and posting of each item seriously and they will be sent anywhere in the World securely. Post cost is approximate, we can discuss exactly how you would like to receive the book and I can get you an exact costing. Please don't hesitate to contact me with regards any questions or requests.

You can also arrange your own courier service. Please contact me at all with any queries or questions. I would be delighted to help you further. The item "LORD OF THE RINGS J.

Tolkien UK 1st Editions (1954-55) FIRST 5,4,2 Imp" is in sale since Thursday, October 4, 2018. This item is in the category "Books, Comics & Magazines\Antiquarian & Collectable". The seller is "beatlesauction" and is located in Dublin, Dublin. This item can be shipped worldwide.