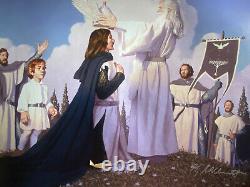 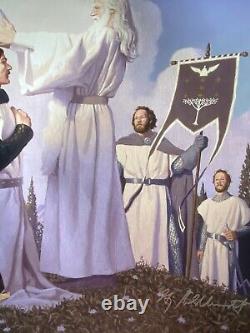 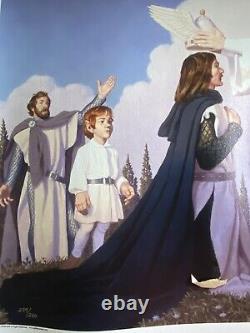 Photos are of the actual product you will receive, not stock. Known world wide for their fantasy and science fiction illustrations, identical twin brothers Greg and Tim Hildebrandt created an abundance of fascinating artwork, most notably their illustration work for J.

Tolkien's'The Hobbit' and'Lord of the Rings'. "The Return Of The King", originally created in the 1970's for Ballantine Books, is a limited edition giclee on canvas, numbered and hand signed by Greg Hildebrandt! Greg Hildebrandt and his twin brother Tim were born on January 23, 1939, in Detroit, Michigan.

They worked collaboratively as fantasy and science fiction artists; in the illustration world they became better known as "The Brothers Hildebrandt" and are often credited with being two of the founding fathers of the fantasy art genre. The brothers began their professional careers in 1959, during which they produced illustrations for comic books, movie posters, children's books, posters, novels, calendars, advertisements, and trading cards.

Some of their most notable works, and what won them international recognition, are the 1976, 1977, and 1978 J. Tolkien'Lord of the Rings' calendars, and the original'Star Wars' movie poster of 1977.

The brothers spent literally thousands of hours over the course of three years working on the'Lord of the Rings' calendars which comprise their most famous and beloved body of artwork. Working side by side, often on the same piece together, the creation of much of the Hildebrandt brothers' artwork was truly a family affair, as sons, daughters, wives and a host of friends modeled homemade costumes and posed for endless Polaroid pictures that served as templates for their paintings. As Greg attests, We would work together on many large pieces.

Switch seats and work on sections that the other one was painting and then switch back. Our painting style was so close that you really could not tell which brush strokes were done by which guy. With their reputation as master illustrators growing from the success of the first Lord of the Rings calendar, the brothers got a last minute call for a much-needed poster for some sci-fi movie that was opening in a matter of days; the original artwork had been rejected and the director wanted something good immediately.

In just about 36 non-stop hours, The Brothers Hildebrandt created the epic Star Wars poster for George Lucas, using Greg's wife as a model for Princess Leia, and a friend in an old bathrobe as their Luke Skywalker. The rest, of course, is history! Incidentally, that same old bathrobe was a frequent guest star in many of the model shots for the Tolkien calendars. The work of Greg and Tim Hildebrandt has received widespread fan recognition over the last 42 years in the genres of fantasy, science fiction, comic art, pinup art, western art, religious art, comic strip art, and sequential art.

During this time they worked for many varied companies including Marvel Comics, DC Comics, Franklin Mint, Batfilms, Lucas Films, and a plethora of book publishing companies. Some of their other projects include illustrations for Collectable Card Games (CCG) for'Magic the Gathering' and'Harry Potter' published by Wizards of the Coast, as well as several personal projects including the'American Beauties' series of 1940's - 50's style pinup art.

The Brothers Hildebrandt also created a series of tribute paintings celebrating the heroes of September 11, the proceeds of which were donated to the NY Firefighters' 9/11 Disaster Relief Fund. Having been nearly inseparable for most of their lives and careers, The Brothers Hildebrandt actually parted ways both creatively and personally in 1980, after the intensely productive'Tolkien Years'. To a large extent, they both wanted to see if they could work independently of each other and pursue individual projects because they simply had never done it before.

For over a decade, the twins basically didn't see or talk to each other, although they did somewhat secretly keep tabs. But by 1991, their father had passed away, and their bereft mother had had enough. The Brothers Hildebrandt had finally proven to themselves that they could work just as well apart, and much to their mother's joy (and their own), Greg and Tim reunited and went on to create another mountain of amazing art. Unfortunately, the brotherly duo was split up more permanently in June of 2006 when Tim Hildebrandt passed away at the age of 67. In 2010, Greg Hildebrandt received the Chelsey Award for Lifetime Artistic Achievement. Today, Greg remains active in the art world, continuing work on his'American Beauties' pinup art series. This item is in the category "Art\Art Prints". The seller is "limeygrrl" and is located in this country: US. This item can be shipped to United States.