Ralph Bakshi's The Lord Of The Rings Shire Production Background 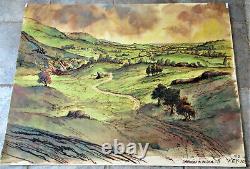 This production art is from director Ralph Bakshi's personal collection. This very rare, animation production background painting is. And one of a kind.

It was used on screen, but then deleted from the final cut, in the 1978 Ralph Bakshi animated film. The Lord of the Rings, part 1. It is from Sequence A. It was created by Louise Zingarelli (lines copied on acetate) and Johnnie Vita (color painting on board). 40" x 30" on Acetate & Board.

The item "RALPH BAKSHI'S THE LORD OF THE RINGS SHIRE PRODUCTION BACKGROUND" is in sale since Thursday, August 12, 2021. This item is in the category "Collectibles\Animation Art & Merchandise\Animation Art". The seller is "ralphbakshi" and is located in Silver City, New Mexico. This item can be shipped worldwide.