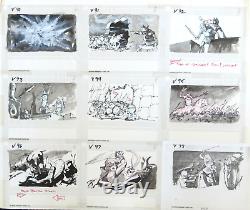 AN ORIGINAL STORYBOARD FROM THE HELM'S DEEP BATTLE SEQUENCE. This production art is from director Ralph Bakshi's personal collection.

This very rare, storyboard art is. And one of a kind. It was drawn by MIKE PLOOG during p roduction in 1977 for the 1978 Ralph Bakshi animated film. The Lord of the Rings, part 1.

The last panel on the storyboard is a xerox. Ploog is well known for his storyboarding and design work in such films as. In comics, Ploog is best known for his work on Marvel Comics' 1970s Man-Thing. And The Monster of Frankenstein.

Series, and as the initial artist on the features Ghost Rider. This artwork comes with a Certificate of Authenticity (COA) from Bakshi Productions, Inc. This item is in the category "Collectibles\Animation Art & Merchandise\Animation Art". The seller is "ralphbakshi" and is located in this country: US. This item can be shipped worldwide.