The Lord of the Rings, 1964 Deluxe with Original Pauline Baynes Tryptic Box 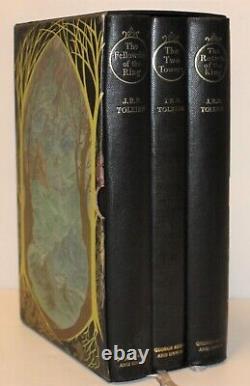 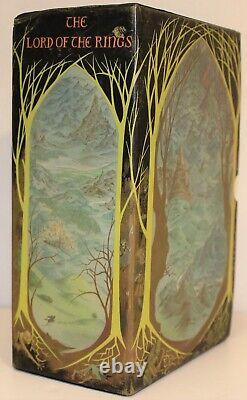 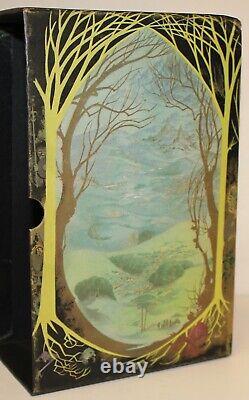 Please note, this set is listed on multiple sites and is attracting more interest than any other item we have listed. Experienced collecters are always looking for something unique. While these sets were around in our early days of our business, there's not been one for sale or in this nice condition for more than a decade. It WILL sell at any time! The rarest first edition set of, The Lord of the Rings.

Allen & Unwin 1963 year set, 13,10,10 printings produced as a special limited edition set, only 1000 total produced for the 1964 year. The first editions of each of the three book titles were printed fourteen, eleven and eleven times respectively. What is missing is the 1964 printing set, this is it.

Allen & Unwin published "The Lord of the Rings" in a three-volume deluxe hardback edition for which they asked Pauline Baynes to design a slipcase. Never having read the story, Baynes was faced with the prospect of having to plow through a thousand pages of narrative before picking up a brush. Her sister, who knew the book well, rescued her from her predicament by painting a panorama of Tolkien's characters and locales that Baynes was able to draw on. The triptych that Baynes created became one of the most widely reproduced of all her paintings, being recycled for the iconic cover of a one-volume paperback edition of "The Lord of the Rings" in 1968, and a three-volume "Unwin Paperbacks" version in 1981.

Only a thousand sets were produced. They were still cheaply printed so there was much attrition due to wear and damage. Arguably this set, even with wear and tear, is the rarest "Lord the Rings" set. It is difficult to value. A new hard wearing slipcase and buckram covered books was produced which would also justify a higher price.

Pauline Baynes produced a three panel artwork to cover the back and sides. She was the only artist Tolkien personally approved and came up with an imaginative Mt Doom scene. This slipcase unfortunately did wear well either and few original slipcase exist. Like dust jackets, the original slipcase of this set is the most valuable feature. The books and case has been dropped on the top left corner which also bumped The corner of The Return of the King volume.

Two Tower volume is often found with a fades/discolored spine compare with the other two. This one is in exceptional condition. A few former mould spots appear on FotR and RotK spine. FotR has a neat gift inscription fo the front end page. There are minor scuffs to the slipcase, but overall near fine.

Don't delay, this is truly a rare set and as good as you'll ever find. This item is in the category "Books, Comics & Magazines\Antiquarian & Collectable". The seller is "dogfark" and is located in this country: GB. This item can be shipped worldwide.