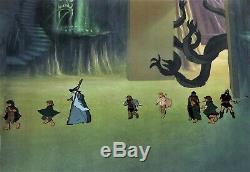 The Hobbits Encounter Strider at the Inn at Bree. These four very rare animation cels (4 cels on top of eachother) are. Handpainted, and one of a kind. They were used in the 1978 Ralph Bakshi animated film.

The Lord of the Rings, part 1. He will sign this animation art, if you wish.

Image size is: 11" x 13" , and comes with a copy of the original animation background from the scene. The Hobbits feet are printed on the background. This setup is from Sequence F. Each piece was used in its own production, and is an historically significant part of each animated film. The cels come with a copy of the original background from the scene where available, or the sequence, or the film.

Over the next eleven years, Bakshi directed seven additional animated features, including Hey, Good Lookin' (1982), American Pop (1981), Coonskin (1975) and Heavy Traffic (1973). He is well known for his fantasy films, which include Wizards (1977), The Lord of the Rings, part 1 (1978) and Fire & Ice (1983). After a nine-year hiatus from feature films, he directed Cool World (1992), The Cool and the Crazy TV film (1994), and Spicy City HBO TV series (1997). Look for LDCI on youtube. The item "THE LORD OF THE RINGS ORIGINAL RALPH BAKSHI ANIMATION CELS with Free Autograph" is in sale since Saturday, December 28, 2019. This item is in the category "Collectibles\Animation Art & Characters\Animation Art\Production Art". The seller is "ralphbakshi" and is located in Cliff, New Mexico. This item can be shipped worldwide.