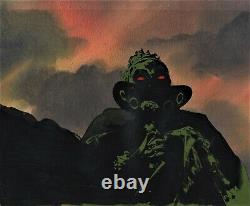 TO MORDOR WE WILL TAKE YOU! This very rare animation cel is. Handpainted, and one of a kind. It was used in the 1978 Ralph Bakshi animated film.

The Lord of the Rings, part 1. He will sign this animation art, if you wish. Image size is: 11" x 13" , and comes with a copy of the original animation background from the scene. This setup is from Sequence HA. Each piece was used in its own production, and is an historically significant part of each animated film.

The cels come with a copy of the original background from the scene where available, or the sequence, or the film. Ralph Bakshi is a director of animated and live-action films. In the 1970s, he established an alternative to mainstream animation through independent and adult-oriented productions. Between 1972 and 1992, he directed nine theatrically released feature films, five of which he wrote.

He has been involved in numerous television projects as director, writer, producer and animator. Bakshi began his career at Terrytoons Cartoon Studio in 1957, and made his debut feature film, Fritz the Cat in 1972. Over the next eleven years, Bakshi directed seven additional animated features, including Hey, Good Lookin' (1982), American Pop (1981), Coonskin (1975) and Heavy Traffic (1973).

He is well known for his fantasy films, which include Wizards (1977), The Lord of the Rings, part 1 (1978) and Fire & Ice (1983). After a nine-year hiatus from feature films, he directed Cool World (1992), The Cool and the Crazy TV film (1994), and Spicy City HBO TV series (1997). Look for LDCI on youtube. The item "THE LORD OF THE RINGS ORIGINAL RALPH BAKSHI ANIMATION CELS with Free Autograph" is in sale since Saturday, May 22, 2021. This item is in the category "Collectibles\Animation Art & Merchandise\Animation Art". The seller is "ralphbakshi" and is located in Silver City, New Mexico. This item can be shipped worldwide.