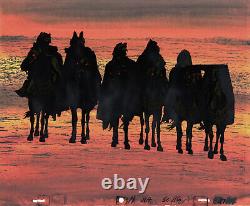 To Mordor we will Take you! This very rare animation cel is.

Hand painted, and one of a kind. It was used in the 1978 Ralph Bakshi animated film. The Lord of the Rings, part 1.

He will sign this animation art, if you wish. Image size is: 11" x 13" , and comes with a copy of the original animation background from the sequence. This setup is from Sequence HA. Each piece was used in its own production, and is an historically significant part of each animated film.

This item is in the category "Collectibles\Animation Art & Merchandise\Animation Art". The seller is "ralphbakshi" and is located in this country: US. This item can be shipped worldwide.