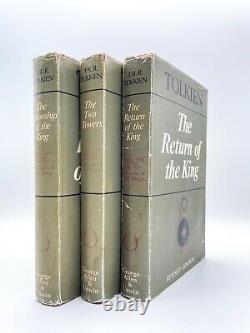 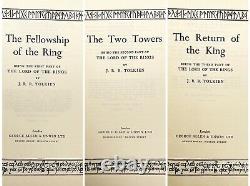 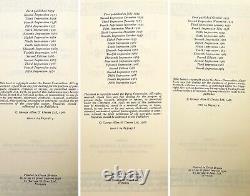 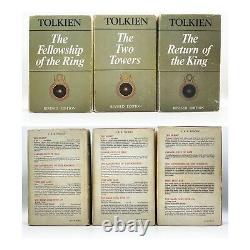 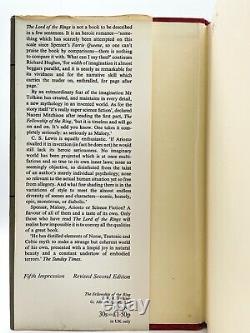 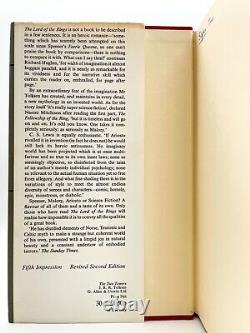 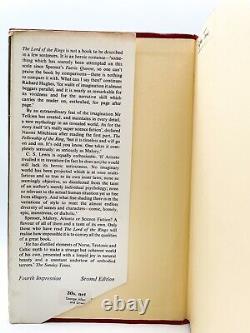 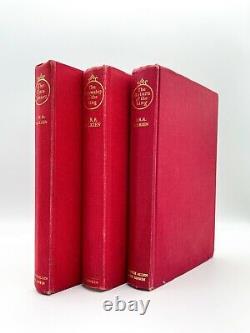 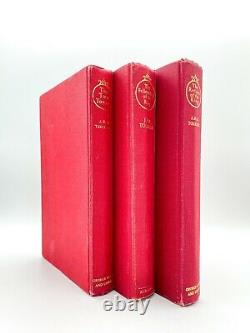 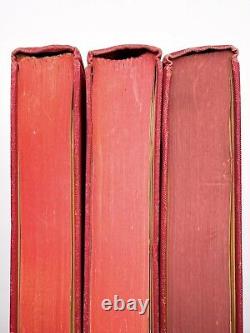 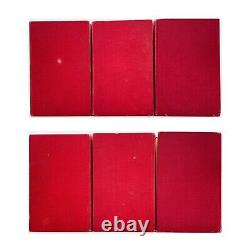 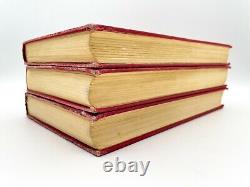 The Lord of the Rings Set (UK). Octavo, full-bound red cloth with gilt stamped title to spines. Early Printings, Second Edition of J. A very well-kept and preserved example. Tolkien (18921973) was a leading philologist, translator, and fantasy author best known for The Hobbit and The Lord of the Rings.

As a schoolboy he excelled in languages and in 1911 he received a scholarship to Oxford, where he specialized in Norse, Anglo-Saxon, Old and Middle English, and other Germanic languages. The Lord of the Rings began as a sequel to Tolkien's 1937 children's fantasy novel The Hobbit, but eventually developed into a much larger work. It was written in stages between 1937 and 1949, much of it during World War II in letters to his son, and finally, having polished it to his own satisfaction, published it as a trilogy from 1954 to 1955, a volume at a time, impatiently awaited by a growing audience It is considered one of this centurys lasting contributions to that borderland of literature between youth and age It seems destined to become this centurys contribution to that select list of books which continue through the ages to be read by children and adults with almost equal pleasure.

Book bindings mostly tight and about square with a slight slant to Part II, more moderate to Part I, and mild looseness to latter with mild lean. Boards show well with some light stains and water marks. Moderate shelf wear and rubbing to corners and hinges.

Original gilt stamped title to spine well preserved with a bit of wear to head and foot. A few bumps to edges. Text blocks mostly clean and bright. Internally clean and bright but for owner's name penned to top left corner of front endpapers.

Dust Jackets present very well. Panels clean with some light rubbing and moderate age-toning to rear. Hinges, creases and corners show moderate wear with chipping to same as well as head and foot of spine with slight loss and folding. Edges near clean with some shelf wear and a few small closed tears.

Spines unfaded and well-preserved but for about one-half inch closed tear partially crossing mid-spine of Part III. Original Fourth / Fifth Impression Dust Jackets stating same. Two of three Not Price Clipped with the third Clipped and replaced with publisher's updated pricing sticker. A handsome example of this collectable trilogy. A classic work considered by many to be amongst the best, including The Adventures of Augie March by Saul Bellow, All the Kings Men by Robert Penn Warren, American Pastoral by Philip Roth, An American Tragedy by Theodore Dreiser, Animal Farm by George Orwell, Appointment in Samarra by John O'Hara, Are You There God?

It's Me, Margaret by Judy Blume, The Assistant by Bernard Malamud, At Swim-Two-Birds by Flann O'Brien, Atonement by Ian McEwan, Beloved by Toni Morrison, The Berlin Stories by Christopher Isherwood, The Big Sleep by Raymond Chandler, The Blind Assassin by Margaret Atwood, Blood Meridian by Cormac McCarthy, Brideshead Revisited by Evelyn Waugh, The Bridge of San Luis Rey by Thornton Wilder, Call It Sleep by Henry Roth, Catch-22 by Joseph Heller, The Catcher in the Rye by J. Salinger, A Clockwork Orange by Anthony Burgess, The Confessions of Nat Turner by William Styron, The Corrections by Jonathan Franzen, The Crying of Lot 49 by Thomas Pynchon, A Dance to the Music of Time by Anthony Powell, The Day of the Locust by Nathanael West, Death Comes for the Archbishop by Willa Cather, A Death in the Family by James Agee, The Death of the Heart by Elizabeth Bowen, Deliverance by James Dickey, Dog Soldiers by Robert Stone, Falconer by John Cheever, The French Lieutenant's Woman by John Fowles, The Golden Notebook by Doris Lessing, Go Tell It on the Mountain by James Baldwin, Gone with the Wind by Margaret Mitchell, The Grapes of Wrath by John Steinbeck, Gravity's Rainbow by Thomas Pynchon, and The Great Gatsby by F. Others include titles such as, A Handful of Dust by Evelyn Waugh, The Heart Is a Lonely Hunter by Carson McCullers, The Heart of the Matter by Graham Greene, Herzog by Saul Bellow, Housekeeping by Marilynne Robinson, A House for Mr. Naipaul, I, Claudius by Robert Graves, Infinite Jest by David Foster Wallace, Invisible Man by Ralph Ellison, Light in August by William Faulkner, The Lion, The Witch and the Wardrobe by C.

Lewis, Lolita by Vladimir Nabokov, Lord of the Flies by William Golding, The Lord of the Rings by J. Dalloway by Virginia Woolf, Naked Lunch by William Burroughs, Native Son by Richard Wright, Neuromancer by William Gibson, Never Let Me Go by Kazuo Ishiguro, Nineteen Eighty-Four (1984) by George Orwell, On the Road by Jack Kerouac, and One Flew Over the Cuckoo's Nest by Ken Kesey.